Gasoso is an exceptional stallion owned by Yeguada La Pasión. He is ridden by professional dressage rider, Jonathan Bautista, who himself comes from a successful riding family. Gasoso was born on 19thFebruary 2011 at the breeder Ferraz da Costa in Portugal. Gasoso is the son of Soverano III, who was ridden by Carlos Pinto at the World Equestian Games in Normandy in 2014. 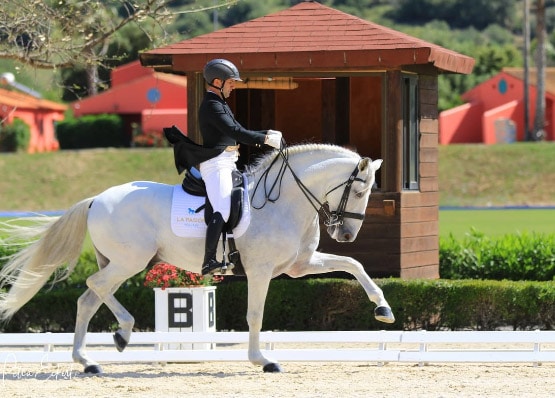 Gasoso’s first big performance came when he was just eight years old in January 2019. Despite it being his debut tournament appearance, the team bravely decided to put him in the Grand Prix event – and they were rewarded as he took first place.

Juan Bautista has been training the beautiful young stallion since 2016. For him, Gasoso is a dream horse that combines all the traits of a champion: agility, perseverance and charisma.

And what goals does Jonathan Bautista have for Gasoso for the future? ¡Lo maximo!

We look forward to seeing you and to help you on your training and travel needs.

By continuing to browse the site you are agreeing to our use of cookies.
X
Kontakt